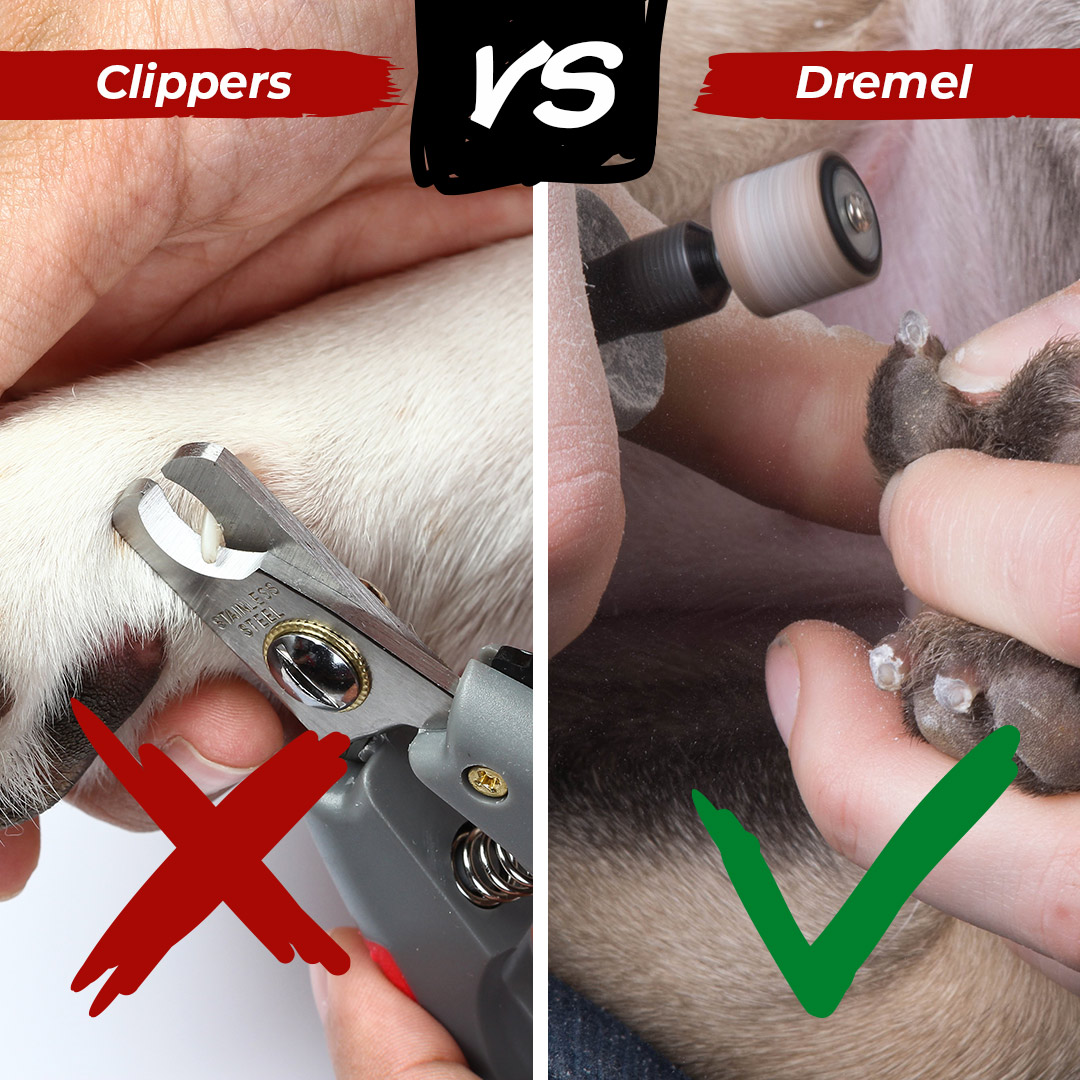 Can you hear your dog walking across the floor from the other end of the house just by the clack of his nails? Do you always end up with a scratch or two from a wayward paw during playtime? Your pup’s nails can grow long and sharp in the blink of an eye, which is why regular nail trimmings are so important.

Noisy walking and accidental scratches aside, long nails can have a devastating effect on your dog’s health. Older dogs who are prone to arthritis are especially at risk of developing painful joint problems due to overgrown nails. You might even notice their gait changing—are they picking their paws up higher to walk? Limping? Standing awkwardly? Check their nails. If they’re overgrown, they could be putting pressure on your dog’s toes, or even changing their anatomy and paving the way for arthritis and injury.

How Long Should Your Dog’s Nails Be?

Ideally, a dog’s nails shouldn’t touch the ground when they’re standing square on a level surface. In time, a regular nail-trimming routine can get your dog’s nails to that length, but don’t try to go that short if this is the first time you’ve trimmed your pup’s nails in a while or if their nails are overgrown. You need to be careful of the quick, which can elongate without regular nail trimmings. To get your dog’s nails trimmed to a healthy length, you’ll need to be patient and consistent in your trimming routine.

Luckily, you’ve got a handful of options for getting the job done.

Clippers are the most common tools used to trim a dog’s nails, and they come in two forms: guillotine style and scissor style.

Another handy tool is the nail Dremel.

Which Tool Is Best for Your Dog?

Ultimately, the answer comes down to your personal preference and how safe you feel using these tools. It also depends on your dog. If clippers nicked one of his quicks once, he might refuse to let them anywhere near his paws. But if your dog won’t tolerate loud noises, he might run at the sound of the Dremel. Both of these things can be overcome with training—to a degree—but could influence your choice.

Why a Dremel is our Preferred Choice

If you’re considering switching to a Dremel and throwing out your clippers but aren’t sure if you should take the plunge and buy one, consider this:

Of course, you and your dog will have a learning curve. Almost every dog will need some time to adjust to the sounds, smells, and sensations associated with using a Dremel, so, for the best results, take your time. That could mean a day or two, a week or two, or even a month or two. Be patient, use lots of treats, and make sure to end your training and desensitization sessions on a good note every time.

Here are some tips for desensitizing your dog to the Dremel:

1. Start by getting your dog used to the sight of the Dremel and having it near his paws.

2. Now that your dog is good with the Dremel while it’s off, start getting him used to the sound of it running.

3. Now that your dog is accustomed to the sight and sound of the Dremel, you can start acclimating him to the sensation.

Our biggest tip is to take things slowly and watch for signs that your dog is getting stressed, anxious, overwhelmed, or distracted. If you need to cut a training session short, or even go back to a step your dog has already mastered, to make sure it ends on a positive note, do it. It might require a longer time commitment on your part, but both you and your dog will benefit in the long run.

All of our Lucky Dog grooming experts take every precaution necessary when trimming your dogs nails. You can always feel confident that your dog is in great hands when we perform your dog's nail trimming. Make sure to schedule a trim during your next dog bathing.